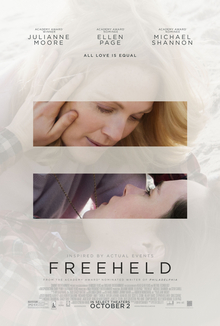 Get your tissues ready. I can’t remember the last time a trailer rocked me to the core like this, but man, Freeheld looks great. It’s a based on a true story (yes, I’m a sucker for those) and stars Julianne Moore and Ellen Page. (The supporting cast isn’t so shabby either.)

Can you believe this events took place this century? I feel so ignorant that I didn’t know their story, because Laurel Hester was a hero. The movie is based on a documentary of the same name, and I’m planning on checking it out first. Freeheld will be in theaters this October.

One of my favorite things about Queens Tina Fey and Amy Poehler is that they make buddy comedies, a traditionally male-dominated film genre. Or at least they had made one: Baby Mama, which while not the best movie ever, is definitely entertaining (and was the subject of one of my college papers!). That’s changing this December, with the premiere of Sisters. The premise is different (two sisters saying goodbye to their childhood home, instead of a woman and her surrogate bonding), and this time Amy plays the straightedge character against Tina’s trainwreck. Admittedly, the trailer is a little meh at times, but these two have great chemistry together, so I know they’ll still make for an enjoyable flick.

While everyone is freaking out over the Suicide Squad trailer, I’m just going to think about a world without superheroes and supervillians…unless you count boxers.

I love Michael B. Jordan (he’s one of the second-generation stars on one of my favorite shows, Friday Night Lights), and I’m glad he’s getting a role that’s both meaty and mainstream. (You might also recognize him from the indie Fruitvale Station or the new Fantastic Four reboot.)

Also, let’s be honest, the trailer makes Michael B. and Philly look good.