Full disclosure: one of my favorite romantic comedies in recent years is The Proposal. The movie came out in June 2009, and stars the Sexiest Man Alive Ryan Reynolds alongside America’s sweetheart, Sandra Bullock. She plays Margaret Tate, a tough-as-nails book editor who convinces her assistant Andrew Paxton (played by Reynolds) to marry her so she can avoid deportation (to Canada) and he can keep his job. Since an immigration officer is suspicious the pair are committing fraud, they travel to Andrew’s Alaskan hometown in an attempt to prove they’re the real deal.

I love that the movie is heavy on the physical comedy and light on the “romance” part, like old-school romantic comedies (think Bringing Up Baby). And who can forget this hysterical scene?  It wasn’t until I re-watched the movie last weekend with my friends Alyssa, Nancy, Katie, Juliane, Bobby, and Vince though that I realized how stylish Sandra Bullock’s wardrobe is! It’s simple but sophisticated, and appropriate and comfortable enough to wear during winter break catching up with family and friends. Okay, you might have to throw on a coat, but you get the idea.

At the party, Margaret wears this fabulous form-fitting gray dress: sexy and sophisticated. It was hard to find a similar dress, but this one-shoulder dress is perfect for a younger crowd. It’s still comes in that shiny pewter color and I love the slightly structured silhouette. Like the original dress, it’s eye-catching and classy. I read that the movie’s costume designer was inspired by 1940s fashions, so I used that as a jumping board to pick out the accessories. A faux snakeskin clutch with simple hardware adds a retro vibe, as do the the red jewel earrings. Paint your nails in a matching red (not too deep, not too bright) for another pop of color. The pumps may not be Louboutin, but they have the right amount of height and the fun rosette detail to keep things youthful. Finish off with a high and sleek straight ponytail, just like Sandra.

Margaret wears this comfortable and chic outfit when she goes into town with Andrew, and of course, in that epic chant scene with Betty White. Black and yellow can go badly together, but this is how to do it right. This outfit is perfect for lounging around with friends or a coffee date.

Start with a basic long-sleeved white shirt and slim black jeggings. Add a warm and soft sweater in a mustard yellow, one of the fall’s most popular colors. The striped black and white scarf adds interest. Black ballet flats keep the look polished an put together. I added the sunglasses because Margaret wears similar shades when she first comes to Alaska.

Margaret isn’t the only fashionable woman in the movie. Andrew’s mom Grace (played by Mary Steenburgen) also has a comfortably chic fashion taste. I tried to put together a look perfect for a day with friends or maybe out shopping.

So I guess I’m more into the fair isle trend than I thought, because I think this cardigan goes perfectly with these skinny jeans (I would definitely recommend wearing a cami underneath though). These flat, faux suede boots should keep you warm and comfortable throughout the day, and this brown tote is stylish and practical, one of my favorite combinations. Add the flower earrings for that extra little something- this pair picks up the turquoise in the cardigan and is representative of the necklace Gammy (White) gives Margaret.

What do you think? Have you seen The Proposal? What’s your favorite scene? Did you like Sandra’s wardrobe?

Before I begin this post, I’d just like to thank you guys for all your feedback on my first Fashion Inspiration post. I’m actually really self-conscious about the stuff I post, so it was great getting lots of positive feedback! I hope you like my follow-up.

I’ll admit it: on occasion, I still watch Disney Channel. I’m not even part of their main demographics anymore, but I love Sonny with a Chance and of course, Wizards of Waverly Place. The show is about a family of wizards living in downtown Manhattan. (Does anyone else harbor a secret crush on David Henrie? Or is that just me?) Selena Gomez (who I kind of adore) plays Alex Russo, the spunky and sassy troublemaking witch. I think Alex is a fun character for kids because she’s a regular kid, and she’s a slacker, not Little Miss Perfect. Plus, she has a great sense of style.

There are many components to Alex’s outfits. Throughout the series, her fashion has evolved from kind of urban-punk to more polished but still fun and unique. Alex is a huge fan of color, and lots of it. Rarely do we see her wearing something monochromatic. Alex uses layers with ease and she mixes prints like a pro. She tends to wear skinny jeans or tights tucked into boots (where she hides her wands)- she’s not a ballet flat kind of girl. Alex also uses jewelry and accessories like scarves, belts, and vests to add more dimensions to her outfits. Basically, it’s nothing at all like what I wear, but I still love her clothing. So I tried to put together a few outfits that Alex would love (I hope)- colorful, wild, but wearable.

I started this outfit with a great henley (you can take a closer look at the print here). I layered a black cami over it because a) it’s a neutral so it won’t look too busy and b) it makes the print pop even more. Someone who is more adventurous might try the flowy vest (which I love) instead, so I included that look as well. I added the earrings because Alex loves her accessories. The red converse complete the outfit with another pop of color

Not only does Alex love skinnies, she often goes for colored bottoms. Maybe it’s the artist in her. I picked these deep yellow jeans because the color is similar to the gold glitter heart featured in the tank top. The gray henley works under the New York tank because it adds layers without adding a competing color or print. For the boots, I picked this colorful, slouchy pair- you need confidence to wear them, so they definitely give off a “cool kid” vibe. The beret adds an artsy, bohemian vibe.

Alex does have a girly side, so that’s why I picked a dress for the last look. The dress itself is pretty interesting- it’s a tank dress in a fun floral print with an imitation sweetheart neckline. (At least according to me.) I picked gray patterned tights and gray booties, to give the dress a tough but sweet spin. A pink print scarf and a purple hoodie add layers and color to complete the outfit.

So what do you think? Do you watch Wizards of Waverly Place? Did these outfits capture Alex’s look? Would you wear any of these looks? (I know I’m thinking of incorporating some of this into my back-to-school shopping.) Let me know in the comments! 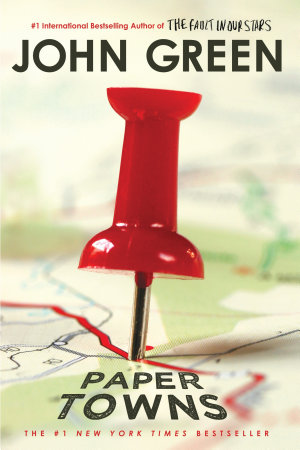 I’m sad to say I haven’t done much reading this summer. I know, my English teachers would be disappointed in me. I’ve started three different books, and I’ve only managed to finish one. (Not that the other ones were bad, they were just overdue at the library.) So this is why my first book review is coming towards the end of July.

Paper Towns was recommended to me by my friend Katie. She’s a big fan of author John Green, and she thought I would enjoy this novel in particular because it’s set in Florida. The main character is narrator Quentin Jacobsen, who goes by Q, who lives in a suburb of Orlando. His neighbor growing up was Margo Roth Spiegelman, the quintessential girl-next-door: beautiful, mysterious, and unattainable. Q is, of course, in love with Margo, and has been since they were childhood friends. They drifted apart though after a grim incident when they were in elementary school and haven’t been close since.

That is until one school night weeks before graduation, when Margo appears outside of Q’s bedroom window. She’s on a mission and Q agrees to be her accomplice after little hesitation. And so the two set off on an adventure across Central Florida, enacting revenge on high school classmates and breaking into Sea World. It’s a night Q won’t soon forget, and he sincerely hopes that will bring him and Margo closer.

The next day Margo doesn’t show up at school. People aren’t worried at first- Margo, with her effortlessly cool and adventurous persona, has disappeared before. This time feels different for Q, and it’s not long before he starts finding clues Margo left for him. Soon Q decides that it’s up to him to find Margo, wherever she is. He gets help from his appropriately quirky and nerdy buddies, Ben and Radar, plus Margo’s best friend, Lacey.

I didn’t have any expectations when I picked up Paper Towns. John Green is actually a pretty big name in the Young Adult publishing world, but I had never heard of him. Regardless, I absolutely devoured this book. I read it over two days, and it was hard for me to put it down. We’ve met the characters of Q and Margo before. He’s the quiet, smart kid- certainly no loner, but definitely not a “cool kid”. She’s the popular girl with a heart. Still, we get to know both of them intimately so they don’t feel like ordinary stock characters. The rest of the friends are the kind of people I would like to hang out with in real life- how often do you get to say that?

Another reason I loved Paper Towns is that it was about Florida, my Florida. For those of you who aren’t Florida (or even U.S.) natives, Florida is a state that is often misrepresented. It’s usually summed up by two things: Disney World and retirees. Instead, I know it is a flat, sprawling suburbia, with perfectly manicured lawns, streets lined with palm trees, and mega-high schools. This is the Florida that Green captures in Paper Towns, and he does it really well because he grew up here too.

Depending on your literature tastes, some of you may feel wary of picking up Paper Towns. I’ll admit I felt “meh” about it when I saw it was a young adult novel. However, just because this book is about teenagers doing teenager-y things, it doesn’t mean it reads like one. Green’s writing is very layered, so there’s psychological and literary perspectives on the characters and the plot. Still, it’s an easy read, and I’d recommend it for a day in, or even a trip to the pool or beach. It’s a nice change of pace from the usual “chick lit” targeted for girls my age.

What do you think? Have you read Paper Towns or any other books by John Green? What have you been reading this summer?